While spending long periods traveling or camping out in the untouched wilderness can be a genuinely fantastic and life changing experience, the lack of a hot shower doesn’t make anything better, either for you or the people you’re standing next to.

The good news is that your journey of a lifetime doesn’t need to come with a side order of freezing water or body odor.

The best solar shower can be easily carried with you and provide a hot shower anywhere, and any time the sun is out.

As usual, we’ve broken our reviews down into our top pick, and then runner’s up based on their stand out features – read on to find the best solar shower for your needs

Advanced Elements are a big name for solar showers, and their products have received international acclaim.

The three-gallon capacity gives you plenty of water, without being hugely heavy and bulky when it comes to transportation.

The large inflow cap makes this shower very easy to fill, while the wide carrying handles make it very easy to mount.

There are a few nice little additions to this shower, such as velcro straps for soap and shampoo, and it rolls up for easy storage. It also comes with a one-year manufacturer’s warranty.

Advanced Elements are the market leader because they make good durable solar showers, and this model is no exception. This is without toiubt the best solar shower on our list.

While we found the Advanced Elements to be the best solar shower of the variety that we reviewed, the Nemo Helio comes in as a very close second.

The vast majority of solar showers are gravity showers, which means you need to hang them up and let gravity pull the water out of them. 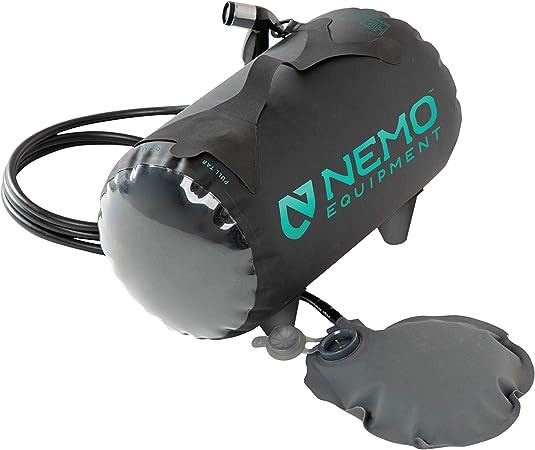 The Nemo Helio Portable Pressure Camp Shower takes a slightly different tack. You pump this shower up, sort of like a water pistol or garden sprayer, building pressure inside it to give you a feeling almost like a powered shower.

This means that the Nemo shower can be a lot larger than gravity showers, with both an 11-liter and 22-liter model.

The shower comes with a 2.9-gallon tank with a foot pump that you can bring up to pressure, and it will give you 5-7 minutes of strong, continuous spray. A release valve ensures that the tank cannot be overinflated.

The folding panel design allows for lightning-fast setup and an even smaller packed size. The black coating on the outside actively draws in sunlight and uses it to warm the water.

If you want more pressure and water from your solar shower and aren’t too worried about having particularly warm water, then the Nemo is the shower for you.

Taking the idea of the Nemo and removing the need for you to pump it manually, The DR.PREPARE Camping Shower comes with a rechargeable air pump to build up the pressure. In our opinion, this is the best solar shower out there when it comes to premium options. 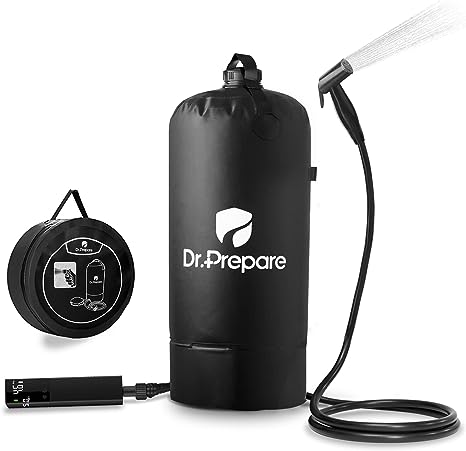 To prevent overpressurization, the LED screen provides real-time pressure readings for your reference. The air pump will automatically stop inflation when the real-time gauge reads 5.0 PSI and can be used to repressurize the bag while you shower.

On a 2.5 hour charge, the pump can deliver 21 gallons of pressurized water.

The shower comes with a spray nozzle that has two spray modes. Press the handle to shoot jets of water or flip up the handle in the opposite direction to spray water constantly.

The design has also been upgraded with a large filling cap to make refilling easier.

The DR.PREPARE Camping Shower means you have access to 4-gallons of properly pressurized warm water, no matter where you are.

Sometimes, you might need to shower a lot of people out in the wilderness. – or maybe your shower will get heavy use during family camping trips, particularly if you have a large family.

We’re not going to ask you why you’re showering all those people, it’s a free country. What we will say is that the RISEPRO 10 gallon is an excellent choice and the best solar shower for your macro-scale showering needs. 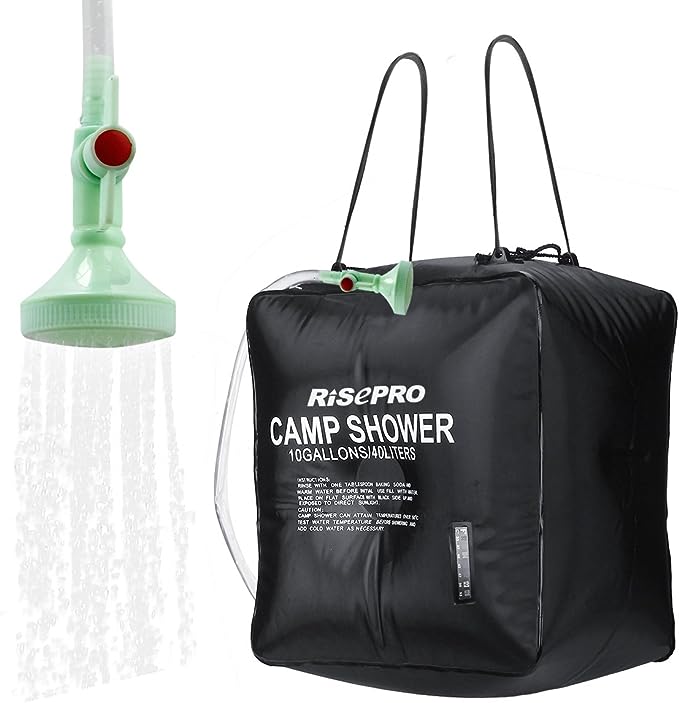 The black PVC material absorbs the heat of the sun and warms the water to 113°F (45°C) in around three hours, as long as it’s in direct sunlight. The temperature gauge on the front lets you know when the water is up to temperature.

The showerhead also has a high and low flow setting to help you conserve water.

Excellent for large-scale showering needs, the RISEPRO is a simple but effective design.

The SUNGA Camping Solar Shower is a simple but effective design, making it the best solar shower on our list for those on a budget. It’s a five-gallon gravity shower, which means you hang it up, and the water falls down. 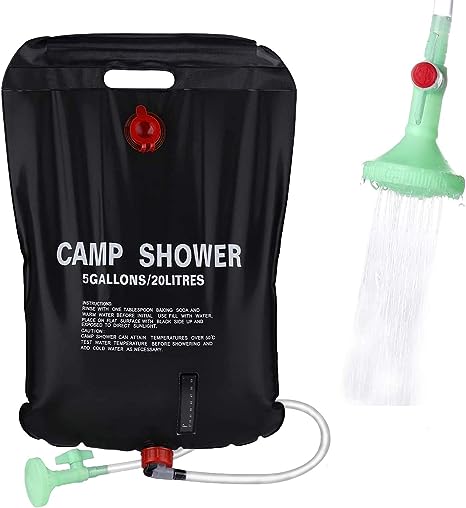 Once hung up, the black PVC material traps heat from the sun very effectively, heating the water.

There’s really not much more to the design than that.

No bells and whistles, but the SUNGA Camping Solar Shower just works.

Now that you’ve got a good idea of what’s available on the market, here is our guide to choosing the best solar shower to fit your specific needs.

There are three factors you need to consider when choosing the capacity of your solar shower:

As a general rule, three to five gallons of water will be enough for two people and won’t require a winch to hang up in a tree.

Most solar showers are made of PVC, which is a good choice because it traps heat, and is a durable material. You will find more advanced materials, such as ripstop nylon on more premium showers.

As a rule, solar showers work in one of two ways:

While most solar showers are fairly simple things, finding one with little pockets to house your toiletries is a nice touch.

The portability of your shower will depend on the materials and the design. PVC is heavier than nylon, and showers with a pressurizing motor will be bulkier and heavier than simple gravity showers.

The primary characteristic you’ll want to consider when buying a solar shower is ease of use, which means it needs to be lightweight and compact enough to transport, easy to fill, and light enough for you to hang without difficulty.

Solar showers are an excellent, easy-to-use, and environmentally friendly option for keeping yourself clean while on the move or out in the wilderness! While our list contains some of the best options on the market – we found the best solar shower to be the Advanced Elements Summer Solar Shower, with the Portable Pressure Camp Shower as a close runner-up. If you’re trying to find the best solar shower for your needs, then we’re confident that one of the models on our list will fit the bill!

Want to use the power of the sun to take hot showers at home? Check our buying guide to the best solar water heaters on the market.