Are Solar Panels a Fire Risk?

Green Coast is supported by it’s readers. We may earn an affiliate commission at no extra cost to you if you buy through a link on this page. Learn more.

People are consistently worried about solar fires and the risk of solar panels catching fire. But are solar panels a fire risk? We evaluate the key considerations you need to know when you buy and install solar panels.

Are Solar Panels a Fire Risk?

Over the last two decades, several homeowners have turned to solar power to get light and warmth in their houses. Solar panels have become exceptionally popular because of the fact that they are environmentally-friendly, affordable, and make you less dependent on municipal power supplies.

However, In Spite of numerous benefits, people still hesitate to invest in solar panels due to their concern about solar fires.

All credit goes to press and media that have been continuously putting a lot of scare stories about photovoltaic panel fire, raising anxiety.

Well, according to some experts, in comparison to electrical equipment that carries live wires, solar panels have negligible risk under normal circumstances.

In this post, we will attempt to resolve your concern related to solar panels fire hazard, but before that, let’s have a quick look at some solar panel safety facts.

According to a report of Green Tech Media, the United States alone has more than 2 million solar power systems installed across the country. Abigail Ross, the president of the Solar Energy Industries Association, says, “ the rapid growth of the solar industry has reshaped the energy conservation in the country.”

Speaking of Japan, the country has about 2.4 million homes with rooftop solar, whereas Germany has around 1.4 million solar panels installed.

In the last ten year, Japan reported only 127 solar panel problems that include some solar fires while Germany reported 350 solar power fire cases in the last two decades.

Although the percentage of disaster caused by solar panels is negligible, many reputable solar manufacturers have started following strict safety guidelines to make their products as safe as possible.

If you’re planning to get solar panels installed, but you have concerns about solar panel fire risk, read the following section in which we’re going to provide answers to your most common concerns.

How Do Solar Panels Work?

Generally, solar panels have smaller units known as photovoltaic cells that are responsible for converting sunlight into electricity — all these cells connected together to make up a solar panel.

Photovoltaic cells observe sunlight and produce direct current (DC) and then convert it into usable alternating current (AC) with the help of inverter technology.

Do Solar Panels Themselves Cause Fires? Although it is infrequent, litigation by Walmart against SolarCity shows that solar fires are possible.

By itself, a large amount of electricity is not a fire risk, but still, electrical fires do happen due to reasons like loose wire connection of the equipment and similar faults. Similarly, a solar panel may cause a fire if there is an improper connection in the device.

In other words, just like your house lights, TV, and toaster, the solar panel has flowing electricity, and therefore, electrical faults may arrive occasionally.

It is important to understand the solar fires are usually the result of electrical issues like incorrect installation, poor insulation, and damaged wires. Often, these fires happen in the combiner box that contains wires connected to your panels before they go through the inverters.

This type of fire is only a problem for solar panel systems that use string inverters. The latest microinverter systems that come without a combiner box because the inverters are installed next to the solar panels.

Electrical surges can be a reason for an electrical issue. Usually, electrical surges occur when higher voltages flow through your electric wires. This high voltage may damage a device that is not designed to deal with a surge.

There can be plenty of reasons for these surges — for instance, sudden power drops, lightning strikes, and more.

You might have noticed it when turning on a high-power appliance like a room heater or air conditioner at your home.

Fortunately, solar fires caused by damaged wires, incorrect installation, and poor insulation can easily be avoided by ensuring that all your home’s electrical appliances are well maintained.

Considering everything, it would be right to say that solar panels do not cause fire themselves. A well designed and installed solar panel system with accurately operating equipment presents no fire hazard to your home.

Nevertheless, it is advisable to hire a professional to get solar panels installed. A good electrician can quickly check for these dangers in advance.

Can Solar Panels Impact the Ability of Firefighters to fight a fire? 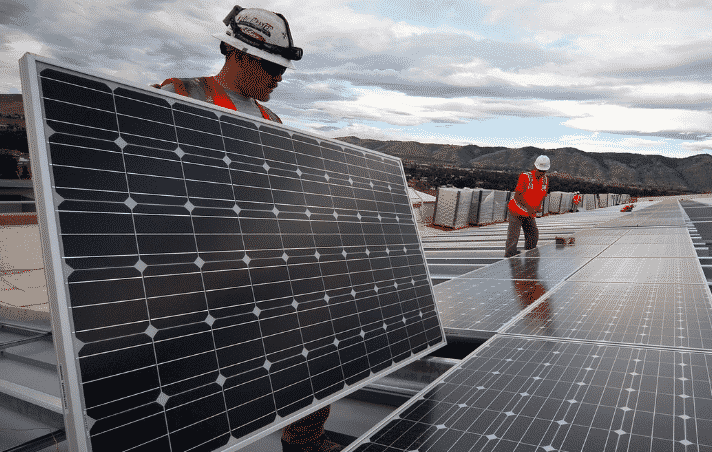 Another big concern that bothers most people is how well firefighters are capable of controlling a house fire with solar panels.

Since solar panels are everywhere – from home roofs to roadside signs to supermarkets, firefighter training is intended to deal with all the challenges that may arrive when fighting fire with solar products involved.

The National Electric Code, which is adopted in all 50 states, mandates the automatic shutdown of solar inverter. This code is the benchmark for safe electrical design and installation, protecting first-responders and help them work safely.

Besides this, building codes also reflect firefighter safety as they ensure firefighters have adequate space on the roof to walk around solar panels.

In short, much like any other industry, people associated with the solar industry working toward creating a safer place for firefighters to do their work.

Do Solar Panels Cause a Fire Risk?

Like other electronic appliances, solar systems are certified and rated for electrical safety. Solar panel certification labs situated across the country verify the electrical safety and performance of new solar panel technologies before they are launched in the market.

Apart from this, a large number of firefighters have suggested and developed arrangements of solar installations that can be positioned on roofs in a way that does not intrude with firefighting work.

What May Cause Solar Panels to Catch Fire?

There can be numerous reasons for solar panels causing a house fire. Although natural hazards such as overvoltage, power surges, lightning may play a significant role, wrongly-sized, and defective equipment can also be a big culprit behind the fire.

Like other electrical installation, solar panel systems are subject to electrical faults like reverse current, short circuits and ground faults.

Additionally, faulty connections may also result in hot spots that can fire flammable material nearby. Besides this, defective AC/DC inverters have also been known to cause solar fires.

What Precautions Should You Take When Getting Solar Panel Installed? (solar panel fire safety)

So Are Solar Panels A Fire Risk?

Building codes, product standards, and related organizations have been working together to ensure solar panels are as safe as possible to use. If you think your home is safe with electrical appliances, then it’s just as safe with a solar panel.

To avoid any possible risk, always make sure that you have an updated home electrical panel along with a whole-house surge protector.

According to the National Electrical Code, your rooftop solar must have an automatic rapid shutdown mechanism in place. This mechanism gets automatically set off when the AC is not flowing to the inverters, indicating that your electrical systems are not working correctly.

So, in that case, if your home electric systems are damaged, your solar panels will automatically shut down to prevent any further damage.

So, when placing an order for solar panel, ask your manufacturer about solar panel safety features. They will be happy to make you understand and evaluate your risk and benefits.

If you’re planning to buy a solar panel, take a look at the following options. Below, we have put together a few popular solar panel brands that you should consider.

SunPower Corp is one of the leading names in the solar industry. Across the world, a significant number of businesses, residential customers, government agencies rely on SunPower solar cells. You can read more about SunPower in our review of their solar panels.

REC Group has been in the Solar industry for more than two decades now. Today, it is counted among the world’s trusted brands of solar panels.

In the year 2016, the REC group was ranked #1 most popular brand of solar panels in California, the United States, and Germany.

Some of their popular solar panels include:

Panasonic was founded in 1975, and since then, the company has been a leader in the solar business. Till now, they have manufactured high-quality and efficient solar panels. Their solar panels have an efficiency rate of 20.3%.

The range of solar panel series Panasonic make are

Some of their popular solar panel models include:

LG Solar is also a reliable name when it comes to high-quality solar panels. The solar panels they produce have the second-highest efficiency of 21.7% in the world.

They use Cello Technology in their solar panels, therefore come with state-of-the-art solar panels come with a 25-year performance warranty. The company claims that all its solar panels go through a strict quality check to ensure top-quality products and performance.

Have other questions about solar? Check out our Q&A about solar guide to get the answers you need.

It would be safe to say that solar panels are an extremely reliable and sound investment for anyone who wants to reduce electricity bill without causing any harm to the environment.

Since solar panels are like any other electrical appliance, they have similar risks as your microwave, refrigerator, or HVAC unit. You don’t worry about them because they’re overwhelmingly safe.

Likewise, your solar panel is safe, you just need to give it routine testing and maintenance.

7 Best Greywater Systems for Homes in 2020

Should Your Buy or Lease Solar Panels?

Get Your Free Guide to Installing or Buying Solar Panels