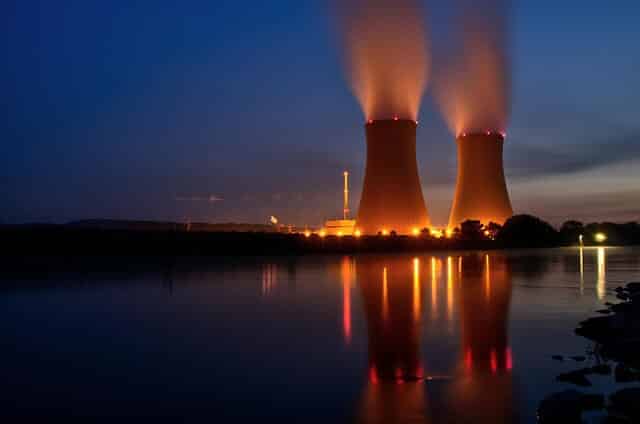 We evaluate the core components of nuclear energy. Our deep dive into nuclear energy pros and cons will highlight how it works and a full analysis to help you learn more about this energy technology.

With an increased demand in energy, we are constantly in search of consistent, efficient, and renewable energy sources.

Nuclear energy is one of the resources, which we have been utilizing as a sustainable source of energy for quite some time.

Most of the developed and some developing countries are using this type of energy to produce electricity.

To know the answers to these questions, let’s explore nuclear energy in greater detail.

The molecules of every substance on earth (gases, liquids, and solids) consist of tiny particles known as atoms. The atoms further divide into three major particles called protons, neutrons, and electrons.

The protons and neutron are part of an atom’s nucleus. And the electrons revolve around the nucleus.

Protons are positively charged and electrons have a negative electric charge on them. However, neutrons are the neutral part of a nucleus and don’t bear any charge.

The bonds between neutron and proton help to hold the nucleus together. There is a huge amount of energy between these bonds.

If the bond breaks down, it releases a massive amount of energy. The process used to break apart a nucleus is known as the fission.

Since the energy comes from the breaking down of the nucleus of an atom, it refers to as “Nuclear Energy”.

The energy released through fission reaction serves as a source to produce heat. Nuclear power plants around the world use nuclear fission to produce electricity.

The most common fuel used in these nuclear power plants is uranium (U-235). The heat generated by the fissions reaction turns the water into steam, which then runs the turbine to produce electricity.

During a nuclear fission reaction, the collision of a neutron with uranium atom causes it to breaks down. This results in the release of a massive amount of energy in the form of heat.  When the Uranium atom splits, the neutron from its nucleus also releases.

The released neutron collides with the close by uranium atom. This leads to a chain reaction, which is a self-sustainable process.

Hence, once started, the fission reaction continues to go on. However, power plants use control rods to regulate this process and harness the required amount of energy.

Advantages and Disadvantages of Nuclear Energy

Here are a few important pros and cons of nuclear energy.

Given below are the major advantages of nuclear energy.

Nuclear power is a sustainable source of energy. Unlike fossil fuel, there are fewer concerns regarding the depletion of nuclear fuel. The nuclear reactors around the world burn less than 1% of the Uranium that we have mined to the date.

At present, Japan and France are working on different projects to find efficient ways to recycle reactor fuel.

Moreover, the use of the latest technology is allowing countries to minimize proliferation issues.

The countries using nuclear energy to run their power plants always keep an eye on the use of the fuel to avoid its proliferation.

The level of efficiency obtained through nuclear energy is much higher than fossil fuels. The reason for this is the high-density level of energy produced during the fission reaction. In addition, this allows generating more energy while utilizing less amount of fuel.

Besides, the fuel can provide constant energy for an extended period. Refueling is normally done less often, which suggests that there is no need to shut down the reactor for this purpose. By making more efficient nuclear reactors, we can harness even more energy through a similar amount of fuel.

The capacity factor for nuclear power plants is very high than alternatives.

Uranium is the widely used fuel for commercial nuclear reactors. There is a huge reservoir of this element in the world, which can serve us for more than 70 to 80 years. In addition, with the advancement in recycling technology, we can reuse spent nuclear fuel over and over. Hence, depletion would not be an issue in the future.

In addition, the amount of fuel used in a nuclear power plant is negligible to the plants operating on fossil fuels.

A conventional power plant requires a constant supply of fuel to continue its operation. Using less nuclear fuel means that we can utilize the Uranium reserves for decades.

Since nuclear reactors expel zero carbon, there is no issue of greenhouse emissions. This makes nuclear power cleaner and environment-friendly source of energy. While operating, a nuclear power plant releases just the hot water or steam.

The iconic cooling tower that you usually see around a nuclear reactor helps to cool down the water vapors and turn them into droplets. This is an ideal way to preserve the water through recycling.

During this process, a negligible amount of CO2 may emit, but it doesn’t pose any threat to the environment.

Nuclear plants use less fuel and run on it for many years. This suggests that there is no need to refuel the reactor after regular intervals.

Their long life and sustainability make it possible to utilize minimum resources for many years. For instance, after building a reactor, we can use it for decades to come.

This is one of the most important advantages of nuclear energy. Nuclear power plants don’t require regular maintenance. Therefore, the overall running cost of such a plant is relatively less than power plants running on coal, natural gas, and kerosene.

Moreover, the operation can continue to run for more than 60 years. This means there is no need to shut down these plants for the sake of maintenance.

The only part of a reactor that needs some kind of maintenance is its core. But this doesn’t happen quite often, as the plant continues to run once sufficient fuel is available.

Apart from the above-mentioned advantages, there are numerous flaws associated with nuclear power. Some of them are given below. Let’s evaluate the cons of deploying nuclear energy power plants.

Although nuclear energy appears to be a cleaner source of energy, there are some other concerns that raise doubts about the feasibility of this energy source.

In fact, the fuel used for the nuclear reactor is highly radioactive. The dumped fuel is so radioactive that it would take centuries to diffuse it. This means that it possesses a constant threat to the safety of human beings and the atmosphere as a whole.

If an unpleasant accident happens (meltdown or leakage), it may prove detrimental not only for the inhabitants living in that area but would affect the environment hundreds of miles away from the accident site.

The radiation may cause burns, genetic deformities, cancer, bone decay, and blood diseases.

In addition, the use of enriched uranium for the making of nuclear bombs is another aspect that puts us at the verge of massive destruction.

In fact, this is the biggest concern for humanity. Since more and more countries are utilizing nuclear energy to produce electricity, the threat of misusing the Uranium is always there.

In addition, to safely dump the used fuel, the reactor management must take great care and constantly check the stored fuel for any chance of excessive radiations.

On the other hand, strict security arrangements are also necessary to avoid any chances of proliferation.

Hence, the safety culture prevailing in the present nuclear power reactors is much stronger than ever.

Another advantage of a nuclear power plant is its reliance on uranium, which is the primary source of fuel for most of the commercial nuclear reactors.

Countries producing Uranium are friendlier and they act responsibly. They don’t behave like the countries which produce oil, coal, and gas. This means that nuclear power plants can obtain a continuous supply of fuel for the future.

However, there is a downside to nuclear energy. This relates to the meltdown or leakage of radioactive material out of a nuclear reactor.

Although the chances of failure or malfunction of the security system are fairly low, the impact of any such incident would be drastic and uncontrollable.

The fuel processing technology has also gone through its evolution and now processes like breeder technology can help to utilize the Uranium reserves for an extended period. This will also help us to deal with the issue of used nuclear fuel.

The recycling of a used fuel can allow us to utilize its increased potential that is capable of producing 30–50% more energy than natural uranium.

If this goes on perfectly, nuclear energy can serve as the semi-renewable resource.

Nuclear power plants produce a small amount of pollution and waste when compared to the power stations that run on fossil fuel.

However, the waste produced by the nuclear reactor is more hazardous and can continue to remain a threat for thousands of years.

On the contrary, the effects of fossil fuel on the environment and human health are much greater. The drastic impact of burning fossil fuels is the major cause of global warming. As a result, the temperature of the earth is rising with each passing day.

By finding a solution to reutilize the spent nuclear fuel, we can minimize the chances of building a radioactive pile. This will make nuclear energy as the most efficient power source when it comes to the safety of our environment.

Nuclear power plants utilize water as a coolant to lower down the temperature of a reactor. Since these reactors produce a lot of heat; it is essential to control the temperature for its safety. The use of excessive amounts of water to cool the reactor causes serious threats to the environment.

We can also use the generated heat to desalinate the seawater. As most of the desalination techniques use fossil fuels, it minimizes the efficiency of the whole process. The burning of these fossil fuels contributes to climate.

Hence, nuclear energy can also serve the purpose to use seawater for various purposes.

For instance, nuclear power reactor releases an ignorable amount of greenhouse gases. Hence, the carbon footprint is a way to lower than that of fossil fuels.

On the contrary, storing the piles of radioactive material is a constant threat to the environment.

When discussing the nuclear energy pros and cons by considering the climate-change, this type of energy source is better than the power plants running on fossil fuel. A nuclear reactor doesn’t release greenhouse gases directly into the atmosphere.

There are a few instances where the plant releases carbon emission. This includes the use of backup generators during refueling or running the plant on idle.

The amount of carbon emissions during the lifecycle of a nuclear reactor is one-twentieth the emissions associated with the conventional power plant.

After discussing nuclear energy pros and cons, it is evident that nuclear power is the most effective and cleaner source of energy. The global nuclear revolution can bring down the costs of building a nuclear reactor.

Moreover, positive developments regarding the recycling or reuse of spent nuclear fuel are also appearing.

If this happens, nuclear energy will turn out to be the most reliable and efficient source of energy. In fact, it can leave behind renewable energy sources in terms of its efficiency and maintenance costs.

This will open new opportunities regarding the use of nuclear fuel for various other purposes.

What are nuclear energy pros and cons in your opinion? I’d love to hear from you in the comments below.